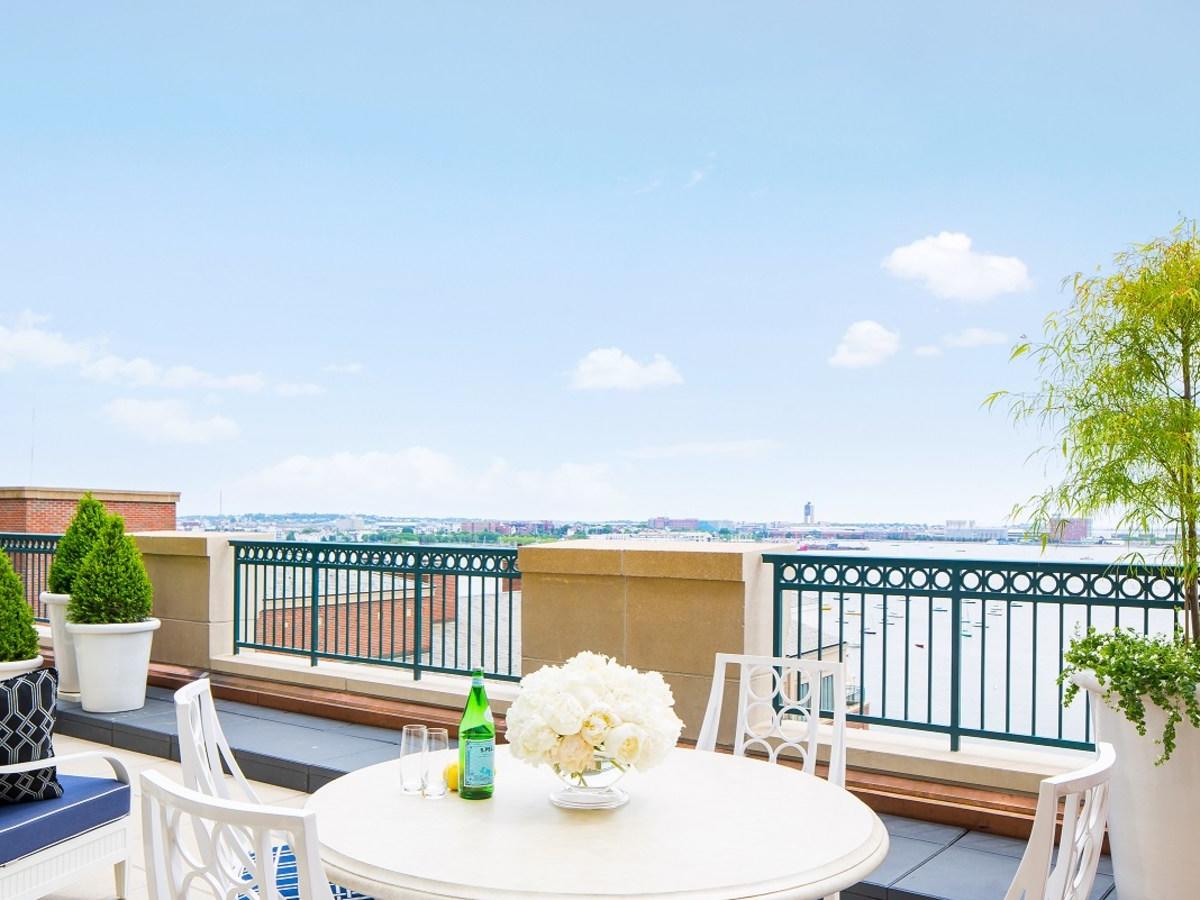 The Boston Globe - At $15,000 a night, this is Boston’s newest, most expensive luxury hotel suite

"The shimmering, broad expanse of the harbor visible from the terrace of the new John Adams Presidential Suite of the Boston Harbor Hotel may look like a million- dollar view, but it’s not.

That’s the price tag to sit on the beautifully appointed 1,000-square-foot patio and watch the boats glide by while working on your tan. And that’s how much it costs to look out on the harbor through the 20-foot floor-to-ceiling windows in the living room, or to drink in that same view while relaxing in the massive tub in the marble-and-mosaic-laden bathroom.

At $15,000 a night, the John Adams Presidential Suite at the Boston Harbor Hotel is now the most expensive hotel room in Boston. It bests previous luxury record holders such as the Ritz-Carlton, the Four Seasons, and the Mandarin Oriental.

The suite, which made its debut this week, occupies two levels that were previously used as event space. The palatial 4,800-square-foot suite includes two bedrooms, a large, open concept living room/dining room/bar, a full kitchen, a multimedia room, and 2½ baths. You won’t find any mini bottles in the bar here. It’s filled with top-shelf brands, and the wine fridge is well stocked. If your spirit of choice is missing, the staff will find it for you. Don’t worry, there’s no extra charge for the liquor. If you feel like eating in, or having friends over for a dinner party, meals can be prepared by hotel staff in your kitchen. The dining table seats eight.

There’s also a private elevator, because if you’re paying $15,000 a night for a hotel room you shouldn’t have to share an elevator with strangers.

“We’re aiming at a range of different markets,” said Boston Harbor Hotel general manager Stephen Johnston. “It’s obviously affluent guests. We’re anticipating people in entertainment, certainly. There are lots of people who come to Boston for medical reasons, and they have the ability to pay for a place like this for two weeks of recuperation while they’re seeing their specialist.”

Because this is Boston, the suite is not outrageously excessive. Such a room would feel like an invasive species in a city of discreet wealth. Instead, think of this suite as Brahmin chic.

“It’s got some classic bones to it, and I borrowed some historic ideas,” said Los Angeles-based designer Rosie Feinberg. She and her firm were challenged to convert an underutilized blank canvas into hospitality eye candy. “I was primarily inspired by the history and the architecture of Boston.”

“There’s definitely a real hardwood floor in there as opposed to an engineered floor,” Feinberg said. “The custom-made coffee table in the living room has a beautiful hammered metal base with stone inset, and it’s real stone. Everything was picked knowing that people would notice.”

Colors in the suite were chosen because they fit with the architecture of the space. Neutral pale gray with white crown molding abounds, with occasional splashes of lavender and navy to give the palette a kick.

Feinberg said her priority with the layout and décor was to make the Presidential Suite feel residential.

“A couple of seating groups in the living room definitely have more of a residential feel. It’s just a comfort mix of the chairs,” she said. “We really thought this is a space where people are going to see it as their home. They’re going to want to see something they would see in their high-end home.”

It’s partially why framed Hermes scarves hang as décor in the bedroom. Closets in the dressing area have clear glass doors so monied guests can see their beautiful Chanel suits and Birkin bags when they stroll by.

But Johnston emphasizes that the John Adams Presidential Suite isn’t just about the luxury fixtures or the square footage. It’s also giving customers what they want, including a special chef’s menu that’s exclusive to the suite.

“We’ve been in the five-star business for a while now,” he said. “We think there’s a demand for this level of luxury and service, and we can finally offer it.”